This past Thursday, Vice President Al Gore came to Norman to give his talk on Global Warming before an excited crowd of 9,000 at a sports stadium on campus at OU. He’s added new things since An Inconvenient Truth was released : much updated information and new photos, including one heartbreaking shot of three polar bears perched on an undercut ice floe that’s virtually melting under their feet. Gore made it local for us. When he was going through the list of American cities endorsing the Kyoto treaty he highlighted Norman, Oklahoma, and to great cheers he called us “a blueberry in a bowl of tomato soup”.

For far better and more in-depth coverage of this event, see it from the thoughtful point of view of Mike. I have a more personal note to share about the evening.

At the end of Gore’s talk, there was a short ceremony in which the University of Oklahoma presentated him with a gift: a watercolor of two Scissortail flycatchers, our wonderful state bird, soaring together above the Oklahoma landscape. 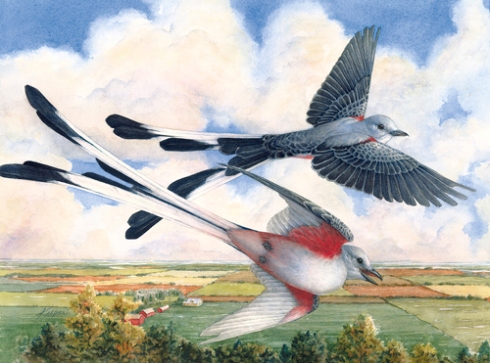 As I said, this evening was very special on a personal level.