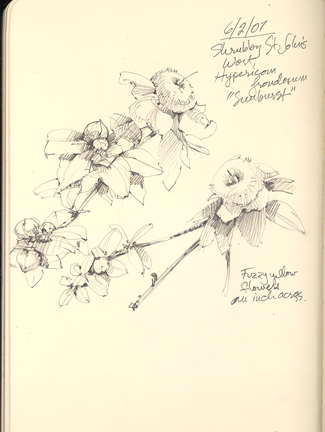 Last night’s big storm washed over and gave us a fine finale as the sun was setting; the back end of the system, moving east, pulled the curtain off of the western horizon and the sun dropped below the cloud mass, illuminating the underside in brilliant rosy peach. The rain continued falling past the sunlight, which set up a nice prism effect on the opposite horizon, and a huge, vivid, perfectly formed double rainbow arched over the oaks with ragged lightning playing around it like thorny vines on an arbor. I took a picture with my little digital camera but won’t bother posting it since it captures nothing but the fact of its existence. 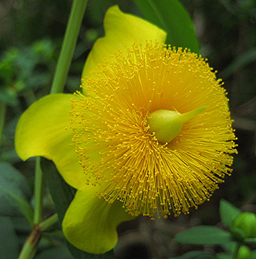 Everything here is growing and sprouting as only plants getting an inch or two of rain every few days can. My new hobby is pulling weeds, every morning on my hands and knees with a cup of coffee next to me. I keep tossing seeds out there and they keep coming up: nasturtiums, lettuce, cucumbers, marigolds, arugula, cosmos. This morning I took the sketchbook out and sat by a few plants where I could record some nice flowerings. Shrubby St. John’s Wort Hypericum frondosum is a nice native shrub with a good fuzzy yellow flower, and the cultivar I’ve got is called “Sunburst”. It has a bonsai look to the gnarled trunks and peeling bark, very handsome indeed. There’s a gorgeous low-slung flowering scuttelaria-like thing I got at Home Depot, unidentified by any label but it was imperative that I buy and plant three of them instantly; if anyone can tell what these are I’ll be interested. They look tropical, I think. The rain has made me ambitious. 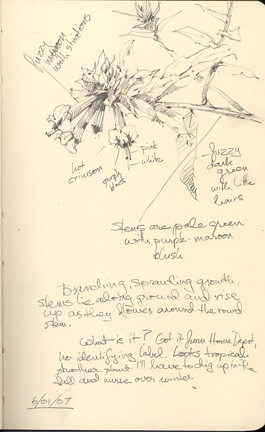