Just back from four days in Cambridge and I have all sorts of good things to share (museums, good restaurants, a hair fiasco, raiding an art supply store, a private dinner in the Harvard Museum of Natural History, etc.) but something came up to pre-empt the Big City Report: the turkey eggs hatched, and how nice I was there to see it happen.

The sound of chuck-chuck-chuck turned out to be mother turkey calling softly to her just-hatched chicks as she led them slowly through the meadow downhill to the woods. I had just enough time to catch a look at little brown-striped fuzzy balls as they tumbled over the bare ground, before they vanished into the tall grass. After that, all I could see was the hen turkey pushing through the tall grass like the Queen Mary steaming through high green seas. Grass stems twitched and waggled comically around her, indicating the chicks far below following their titanic mother’s ankles.

She didn’t walk straight into the woods. She took some time, letting the little ones catch up to her, keeping a bright black eye turned to the sky for the Broadwinged hawk nesting just back of the forest edge in case it might get wind of the exodus and drop by for a little turkey dinner. Every fifteen feet or so she’d sink down onto the ground, only her head visible above the grasses, gathering in her babies under her warm feathers (it was a cold drizzly day) for a rest. I imagine the meadow is a productive place for bugs; she was pecking at stems and once at a dandelion, scattering downy white fluff to the wind, encouraging the chicks to give it a try, too. Maybe they would accidentally hit a bug and learn to eat.

This saga went on for hours. Taking the chicks to the forest was a slow and careful process. My desk is next to the window and I kept one eye on the activity all morning, which was why I happened to hear a cackling and commotion, looked out just in time to see the hen run a few steps and lunge at something in the grass, hurl herself beak-first at something that squawked and rose flying from the grass: a ruffed grouse, tail spread out like a banded fan. It flew into the woods, but stayed near, I couldn’t imagine why- what would a grouse do with a clutch of turkey chicks? 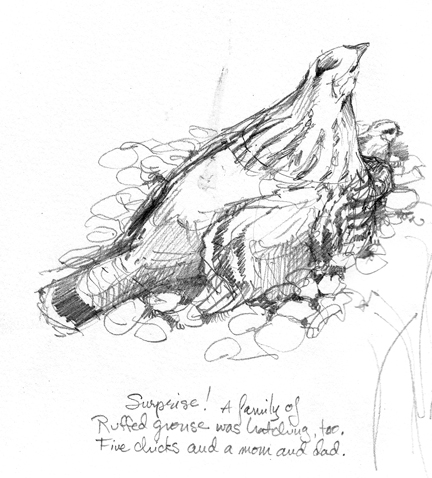 I called to Mike to come up and look-it was his lifer ruffed grouse, as it happened-and while I tried to help him find the nearly invisible bird crouching in the maple leaves, he said “no, it’s out in the open”. A second bird had trotted to the opposite edge of the meadow and stood like a king in full sun, his regal cape of hackles around his shoulders rising and falling in agitation along with the small crest on his head. I grabbed a sketchbook and drew fast.

Right in the middle of the meadow below my window is a big granite rock about the size and shape of a sofa, with a divot in the top where I once curled up on a sunny afternoon and napped. The little king grouse hopped up on this rock for a few moments, striking another pose, then hopped down to the ground. Onto the rock hopped a ginger-colored sprig of a downy baby grouse.

The hen turkey was nowhere to be found, but mama grouse came walking up the hill followed by her brood (5 at least) and settled down onto the ground right below the window from where I had a front-row view, fluffing out her feathers. The chicks pushed themselves underneath. Occasionally one got squirted out like a melon seed and shoved its way back in. I’m fairly sure stuff like this doesn’t come along all that often, and you better seize the day when it does. I got a few sketches, and a little bit of footage, badly shot through a dirty window. I really should wash that window.