Skip to content
Posted on June 11, 2008 by zeladoniac Posted in Uncategorized 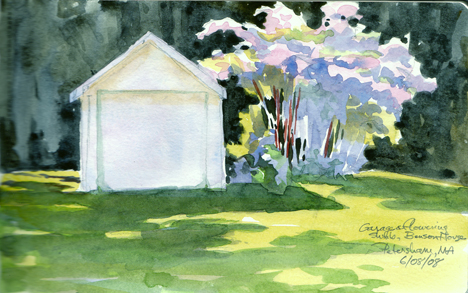 Benson House Garage, in the heat of day

This is going to be a quick one; after sweating through a heat wave for the past few days and feeling too stupid to write, the atmospheric fever broke last night in a grand thunderstorm which sounded like someone skipping boulders overhead. This morning it’s cool and lovely and I am shortly going to go out and make pictures.

Petersham Commons Meadow, painted from the shade of a nice friendly maple tree

The cooler mornings and evenings are nice for making pictures. The other day I returned to Petersham Commons and was serenaded again by bobolinks as I painted a little watercolor in the shade. Yesterday morning I took refuge in the woods and drew, in large format, the stony ruins of an old tannery in the forest, one of three that once operated in Petersham in the 18th and 19th centuries. It was nice in there, quiet except for one noisy black-and-white warbler that kept up its high-pitched see-sawing, and the gentle burble of the little brook at my feet. At one point a mink popped up, also at my feet, and it must not have seen me (and all my cumbersome gear!). Not more than two arm’s length away, it casually trotted down to the water and vanished under a rock while a chipmunk squeaked in alarm. 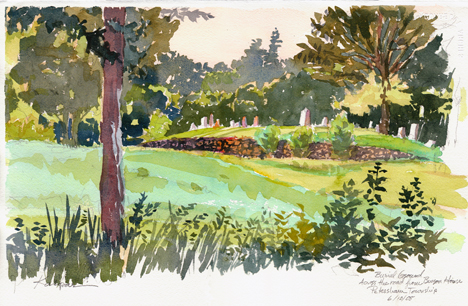 Burial Ground, Petersham (at Harvard Forest, across the road from Benson House)

Last night I sat on the lawn out front of Benson House and did a little watercolor of the burial ground across the road. It’s a small one but the Sanderson family is represented there- they settled these acres, they built the tannery, they farmed the land that’s now called Harvard Forest, they built the farmhouses and outbuildings and raised fine cattle in these lush meadows. The burial ground faces west; every evening for centuries the headstones have been lit up brilliantly in the setting sun. Maybe the perfect placement was just serendipity, or maybe it was the easiest place to locate the family graveyard. My take on this, short as it must be, is that New Englanders have always been endowed with a fine sense of metaphor.