This is the backside of the storm, heading east. The red streak in the foreground is paint and shows the path of the tornado; a paint can was sitting on the garage floor moments before the garage exploded and blew away. Our once-beautiful forest is flattened and littered with debris.

Our home, in shambles under fallen tree trunks, branches and crowns.

The sound of a tornado is  predictably described as sounding “like a freight train”. It’s a catch-all phrase I admit I’ve been curious about. That said, I never have had a great desire to hear it firsthand. Growing up across the Bay from San Francisco, I’ve experienced many earthquakes large and small. A couple of them sounded pretty freight train-like. There were often overtones of stones grinding against each other, waves of infrasound rising and falling.

Crouching in our shelter, we listened to our crank-style weather radio. My phone rang as fellow blogger Tim Ryan called from Barcelona, Spain, frantically warning we were in the path of a large tornado, telling us to dive in the shelter NOW. Tim’s a great friend and knows what a weather wimp I am. He has talked me through many storms, always calm and reassuring. But he was practically shouting at me. We told him we were safe and tucked away underground; all was well, gotta go,  gotta listen to the weather radio ’cause we think they are saying something important, thanks for your concern and thanks for calling, talk to you later.

Then we heard the strangest sound.

This was an oddly quiet storm- no rain, no lightning, little wind. It moved across country at  proper speed limit:  60 mph, driving straight out of the west and propelling the colossal rotating column of an F4 tornado. 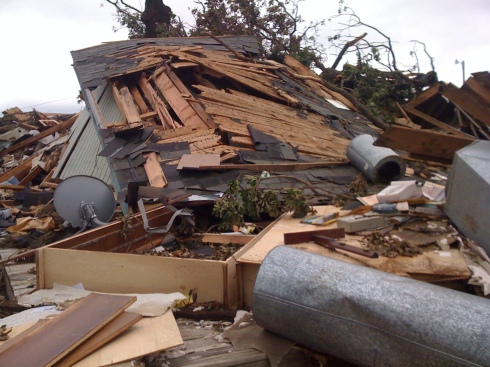 There was just the hint of what sounded like thunder, growing steadily in volume, rising to become a fully-engulfing deep steady hum, felt more than heard. It blocked out every thought, it filled my ears until they popped again and again. I gripped the frame of the shelter and held fast. There was growing vibration, then shaking, then the unimaginable sounds of shattering, smashing and cracking  right overhead. Something banged the lid of the shelter.

Just as I thought my eardrums would explode, there came a massive wrenching pop, and we were showered by a fine brown powdery dust through the vent screens, drifting gently over us as calm slowly returned. I was instantly seized by a splitting headache.

Sunlight was shining through the vent holes where just moments before we had been sitting in the dark. I looked through the small round screens: a patch of clear sky framed by waving leaves. “It’s gone” I said. “Mike, the house is gone”. 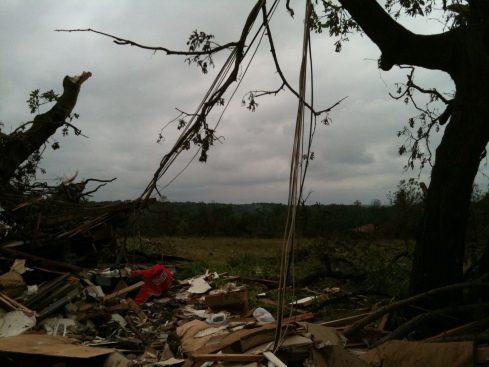 27 thoughts on “A Most Unearthly Sound”