It’s been a cold and snowy week over here. A blizzard swept in last Tuesday and dropped snow on the prairie, but the biggest drop by far was the temperature; I woke to the local NPR announcer saying with near-glee that it was one degree above zero, not counting windchill (it was around -25). We were snowbound.

The temperature this week in my (unheated) basement studio hovered slightly above freezing. I could paint for about an hour before my toes dropped off, to be taken upstairs, thawed out and screwed back on. Going anywhere in this mess was out of the question; roads were icy, snow blew sideways and starlings huddled against the side of the house like whinging orphans in a Dickens novel. I baked ginger-bread men, popped popcorn and made hot tea when I wasn’t running downstairs, brushing on paint and returning upstairs to warm up. The painting is moving forward slowly but surely. I am breathing tropical air in my very active imagination as I push this baby into being.

On Saturday we finally got out- Norman’s one snowplow finally made it down our street- plus it rose above freezing and the roads were suddenly awash with slush and running water. Ant Man and I drove to the YMCA like hounds to the hunt. Did anyone else have the childhood trauma of getting dropped in the deep end of the pool by a well-meaning grown-up? That sink-or-swim thing? I think I was about three years old when it happened to me and-huge surprise- I sank. Naturally, I never learned how to swim or had any wish to get back in the water. 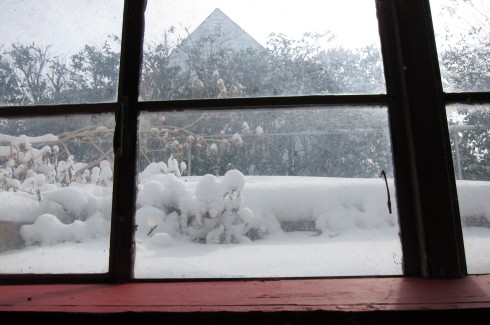 That changed last year when I was nominated for a Smithsonian Artist Research Fellowship. It’s a three-month grant that gives an artist close access to the Smithsonian’s facilities and people. I knew that whatever I proposed would connect me with Smithsonian Tropical Research Institute’s field stations in Panama, along with other sites in Central America and the Caribbean. I proposed to study (and draw and paint) tropical structures: the architecture of a rain forest and its scaffolding of looping lianas (woody vines), some of which can grow three kilometers in length. I wanted to look at the way a hermit hummingbird’s long bill slides into the delicious arc of a heliconia flower, and I wanted to describe the coral reef as a parallel to the tropical rainforest’s canopy. I envisioned those flashing tanagers and euphonias as ecological equivalents of clownfish and moorish idols. Isn’t a parrot a little like a parrotfish, if you sort of squint?

I spent time thinking this over, reading the literature (among others, Joseph Connell‘s Diversity in Tropical Rain Forests and Coral Reefs, Science, Vol. 199, 1978) …..I saw that one could draw parallels between the two ecosystems, especially if you draw to begin with. I even found an artist in Australia who sketches coral reefs underwater, wearing SCUBA gear. I traded emails with a researcher who studies sponges off Belize. She draws underwater, using plastic sheets as a drawing surface, and was very encouraging. Experimenting, I learned that graphite lines stay put when submerged. I was ready to dive in and try it myself. One hitch. I couldn’t swim.

My next step was to join the YMCA. I took a few lessons and got a lot of water up my nose. Other swimmers grew concerned when they saw me thrash through the water. But I persevered, and finally learned enough freestyle technique to get me to one end of the pool and back, slowly.

Before I could enroll in SCUBA school, however, the Smithsonian Artist Research Fellowship was awarded to someone else. Although it was a great honor to get nominated and I was grateful, not to mention pleased at having learned how to write a grant proposal, I was secretly a little relieved I didn’t get it. I felt I was, quite literally, in over my head. So what did I do? I wrote a new proposal, for another fellowship at another institution, and this one, astonishingly, was accepted.

In the end I have learned to love swimming and have kept going with it. Yesterday I swam a solid 50 laps, over a mile and a half. I try to do that a couple of times a week. My speed is up, too: on good days I’m even faster than the big guy in the next lane who’s walking. That’s progress.

I may not have gotten the Smithsonian Fellowship, but I applied for- and got- another one. One that will return me to beautiful New England and Harvard Forest. I can’t wait to tell you all about it.

7 thoughts on “Just Getting Warmed Up Over Here”