Skip to content
Posted on November 16, 2007 by zeladoniac Posted in birds, Nature, Wildlife

This has been a big year for one little bird, one which we haven’t seen around here in almost a decade but one that has been showing up at feeders all around the state (not the same bird, presumably) this fall. It’s not a rarity but it’s uncommon here and it’s such a treat to see one at the feeder. The Red-breasted nuthatch, besides being  smaller than the common White-breasted nuthatch, has a vivid black line through its eye and attractive rufous underparts complemented by a tidy gray-blue back. It has a confiding manner and charming tin-horn call like the back-up beeping of a delivery truck. This morning, one hit our window.

It’s such a painful sound, that little bonk, but my heart really sank when I saw what it was, sitting awkwardly on the deck, panting with a wide-open bill. I never know what to do with window strikes. Since it stresses birds so badly to be handled I usually just leave them be and let them recover if they are going to recover. This one looked like it was going to recover. I went upstairs and fetched a sketchbook and sat cross-legged on the floor by the window, joined by my frustrated, madly meowing tabby cat, Gizmo.

After a few minutes the nuthatch stopped panting and fluttered up to attach itself head downward to a wooden rake handle that leans against the wall. It held on weakly at first, but this is its natural position in life, pointing at the ground, not spraddled on it. I drew the nuthatch as it collected itself and finally, all at once, flew off . A  joy to all of us except the cat. 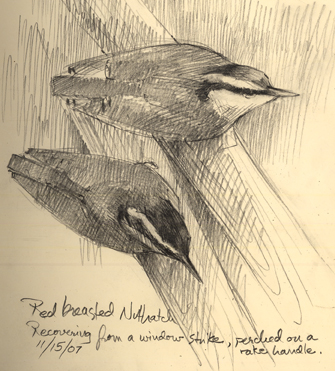 A few minutes afterward, I went outside and refilled the feeders. While putting up the black-oil sunflower seeds I heard a “yank-yank-yank” at my left shoulder. A Red-breasted nuthatch was picking at the suet less than two feet away.  It was answered by another Red-breasted nuthatch nearby. Now we have two.

3 thoughts on “When Birds Collide”